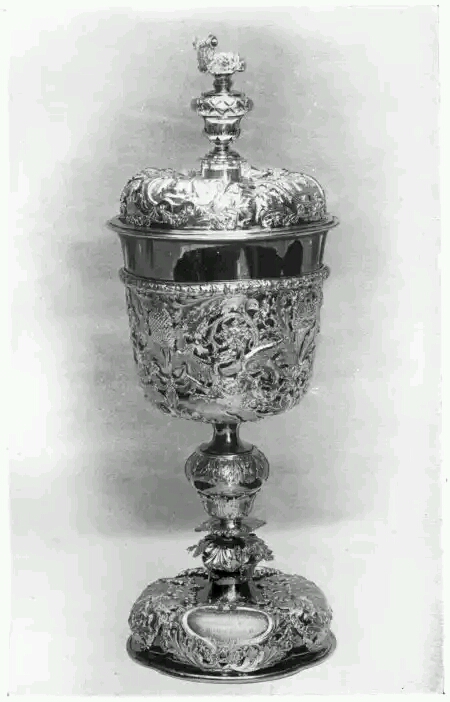 In 1677 Samuel Pepys was elected Master of the Clothworkers’ Company, to whom he presented this cup (illustrated), which is still used at their dinners.

Its description is as follows: Standing cup and cover, parcel gilt. Deep plain band round rim, below which is a chased laurel wreath. The rest of the cup is overlaid with an outer framework of pierced and embossed work of ornate character, which is not gilt. The design embraces foliated scrolls with griffin, and included are teazles and two rams, symbols of the Clothworkers’ Company. The cover is surmounted by a ram.

The cup bears an inscription: “Samuel Pepys Admiralitati Angl: Secretis & Societ: Pannif:{103} Lond: Mr. An. MDCLXXVII,” and a monogram S. P., together with the arms of Pepys.

This piece belongs to the Charles II period, and is typical of the characteristic style of applied decoration, undoubtedly of French origin. This cup has the maker’s mark[3] T G or J G interlaced, and he evidently was an English craftsman working during the latter half of the Charles II period and during the short reign of James II. The vogue then disappeared.