There are in every community young men to whom life at the desk or behind the counter is unutterably dreary and unattractive, and who long for some out-of-door occupation which shall, if possible, contain a spice of excitement. These young men can be divided into two classes—first, those who, if they get a chance to try the life for which they long, will speedily betray their utter inability to lead it; and, secondly, those who possess the physical capacity and the peculiar mental make-up necessary for success in an employment far out of the usual paths of civilized occupations. A great many of these young men think of ranching as a business which they might possibly take up, and what I am about to say is meant as much for a warning to one class as for advice to the other.

Ranching is a rather indefinite term. In a good many parts of the West a ranch simply means a farm; but I shall not use it in this sense, since the advantages and disadvantages of a farmer's life, whether it be led in New Jersey or Iowa, have often been dwelt upon by men infinitely more competent than I am to pass judgment. Accordingly, when I speak of ranching I shall mean some form of stock-raising or sheep-farming as practised now in the wilder parts of the United States, where there is still plenty of land which, because of the lack of rainfall, is not very productive for agricultural purposes.

The first thing to be remembered by any boy or young man who wishes to go West and start life on a cattle ranch, horse ranch, or sheep ranch is that he must know the business thoroughly before he can earn any salary to speak of, still less start out on his own accord. A great many young fellows apparently think that a cowboy is born and not made, and that in order to become one all they have to do[Pg 550] is to wish very hard to be one. Now, as a matter of fact, a young fellow trained as a bookkeeper would take quite as long to learn the trade of a cowboy as the average cowboy would take to learn the trade of bookkeeper. The first thing that the beginner anywhere in the wilder parts of the West has to learn is the capacity to stand monotony, fatigue, and hardship; the next thing is to learn the nature of the country.

A young fellow from the East who has been brought up on a farm, or who has done hard manual labor as a machinist, need not go through a novitiate of manual labor in order to get accustomed to the roughness that such labor implies; but a boy just out of a high-school, or a young clerk, will have to go through just such a novitiate before he will be able to command a dollar's pay. Both alike will have to learn the nature of the country, and this can only be learned by actual experience on the ground. Again, the beginner must remember that though there are occasional excitement and danger in a ranchman's life, it is only occasional, while the monotony of hard and regular toil is not often broken. Except in the matter of fresh air and freedom from crowding, a small ranchman often leads a life of as grinding hardness as the average dweller in a New York tenement-house. His shelter is a small log hut, or possibly a dug-out in the side of a bank, or in summer a shabby tent. For food he will have to depend mainly on the bread of his own baking, on fried fat pork, and on coffee or tea with sugar and no milk. Of course he will occasionally have some canned stuff or potatoes. The furniture of the hut is of the roughest description—a roll of blankets for bedding, a bucket, a tin wash-basin, and a tin mug, with perhaps a cracked looking-glass four inches square.

He will not have much society of any kind, and the society he does have is not apt to be over-refined. If he is a lad of a delicate, shrinking nature and fastidious habits, he will find much that is uncomfortable, and will need to show no small amount of pluck and fortitude if he is to hold his own. The work, too, is often hard and often wearisome from mere sameness. It is generally done on horseback even on a sheep ranch, and always on a cow ranch. The beginner must learn to ride with indifference all kinds of rough and dangerous horses before he will be worth his keep.

With all this before him, the beginner will speedily find out that life on a Western ranch is very far from being a mere holiday. A young man who desires to start in the life ought, if possible, to have with him a little money—just enough to keep body and soul together—until he can gain a foothold somewhere. No specific directions can be given him as to where to start. Wyoming, most of Montana, the western edge of the Dakotas, western Texas, and some portions of the Rocky Mountain States still offer chances for a man to go into the ranch business. In different seasons in the different localities business may be good or bad, and it would be impossible to tell where was the best place to start. Wherever the beginner goes, he ought to make up his mind at the outset to start by doing any kind of work he can. Let him chop wood, hoe, do any chore that will bring him in twenty-five cents. If he is once able to start by showing that he is willing to work hard and do something, he can probably get employment of some kind, although this employment will almost certainly be very ill paid and not attractive. Perhaps it will be to dig in a garden, or to help one of the men drive oxen, or to do the heavy work round camp for some party of cow-punchers or lumberers. Whatever it is, let the boy go at it with all his might, and at the same time take every opportunity to get acquainted with the kind of life which he intends ultimately to lead. If he wishes to try to ride a horse, he will be given every chance, if for no other reason than that he will continually meet men whose ideas of fun are met by the spectacle of a tenderfoot on a bucking bronco.

By degrees he will learn a good deal of the ways of the life and of the country. Then he must snatch the first chance that offers itself to take a position in connection with the regular work of a ranch. He may be employed as a regular hand to help cook on the ranch wagon, or taken by a shepherd to do the hard and dirty work which the shepherd would like to put off on somebody else. When he has once got as far as this his rise is certain, if he is not afraid of labor, and keeps a lookout for the opportunities that offer. After a while he will be given a horse himself, and employed as a second-rate man to do the ordinary ranch work.

Work on a sheep ranch is less attractive but more profitable than on any other. A good deal of skill must be shown by the shepherd in managing his flock and in handling the sheep dogs; but ordinarily it is appallingly dreary to sit all day long in the sun, or loll about in the saddle, watching the flocks of fleecy idiots. In time of storm he must work like a demon and know exactly what to do, or his whole flock will die before his eyes, sheep being as tender as horses and cattle are tough.

With the work of a cow ranch or horse ranch there comes more excitement. Every man on such a ranch has a string of eight or ten horses for his own riding, and there is a great deal of exciting galloping and hot riding across the plains; and the work in a stampede at night, or in line-riding during the winter, or in breaking the fierce little horses to the saddle, is as exciting as it is hard and dangerous. The wilder phases of the life, however, are steadily passing away. Almost everywhere great wire fences are being put up, and no small part of the cowboy's duty nowadays is to ride along the line of a fence and repair it wherever broken. Moreover, at present the business of cattle or horse raising on the plains does not pay well, and, except in peculiar cases, can hardly be recommended to a boy ambitious for his future.

So much for the unattractive reality of ranch life. It would be unfair not to point out that it has a very attractive side also. If the boy is fond of open-air exercise, and willing to risk tumbles that may break an occasional bone, and to endure at need heat and cold, hunger and thirst, he[Pg 551] will find much that is pleasant in the early mornings on the great plains, and on the rare days when he is able to take a few hours' holiday to go with his shot-gun after prairie-chickens or ducks, or, perchance, to ride out with a Winchester rifle to a locality where on one of his working days he has seen a small band of antelope standing in the open, or caught a glimpse of a deer bounding through the brush. There is little temptation to spend money, unless he is addicted to the coarsest kind of dissipation, and after a few years the young fellow ought to have some hundreds of dollars put up. By this time he should know all about the business and the locality, and should be able to gauge just what he can accomplish.

For a year or two perhaps he can try to run a little outfit of his own in connection with his work on a big ranch. Then he will abandon the latter and start out entirely on his own account. Disaster may overtake him, as it may overtake any business man; but if he wins success, even though of a moderate kind, he has a pleasant life before him, riding about over the prairie among his own horses or cattle or sheep, occasionally taking a day off to go after game, and, while working hard, not having to face the mere drudgery which he had to face as a tyro. The chances are very small that he will ever gain great wealth; and when he marries and has children of his own there are many uncomfortable problems to face, the chief being that of schools; but for a young man in good health and of adventurous temper the life is certainly pleasanter than that of one cooped up in the counting-room, and while it is not one to be sought save by the very few who have a natural liking for it and a natural capacity to enjoy it and profit by it, still for these few people it remains one of the most attractive forms of existence in America.

Published in Harper's Round Table, April 7 1896 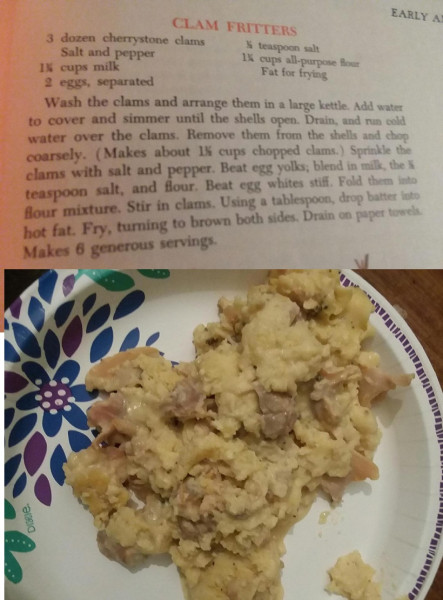 Didn't use any fat to fry this, but otherwise it came out magnificently.
It's like scrambled eggs with clams... very yummy and filling!
Collapse