Bay Street is the chief thoroughfare for wholesale business, while Congress Street and Broughton Street contain the best shops. Bull Street is the most fashionable promenade. Pop. (1890) 43,189.

Four homes and/or museums on various sides of Bull Street: 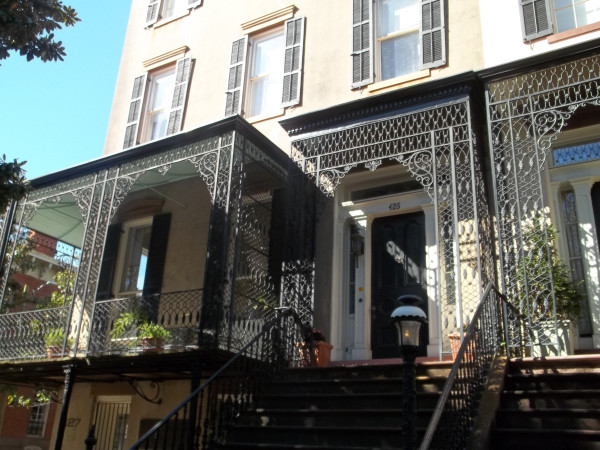 In Wright Square is the handsome County Court House, built in 1889-91. At opposite corners of [Oglethorpe Av and Bull St] are the Independent Presbyterian Church and the Chatham Academy.
( Collapse ) We now reach the beautiful Forsyth Park, with its pines, roses, coleas, palmettoes, oleanders, jasmines, cacti, magnolias, etc. In the centre is a fountain. The Parade Ground forming an extension of the park towards the S., contains a fine Confederate War Monument. At the S. end of the Parade Ground is the Telfair Hospital. At the corner of Whitaker and Gaston Sts., adjoining Forsyth Park on the W., is Hodgson Hall, with the library and collections of the Georgia Historical Society. 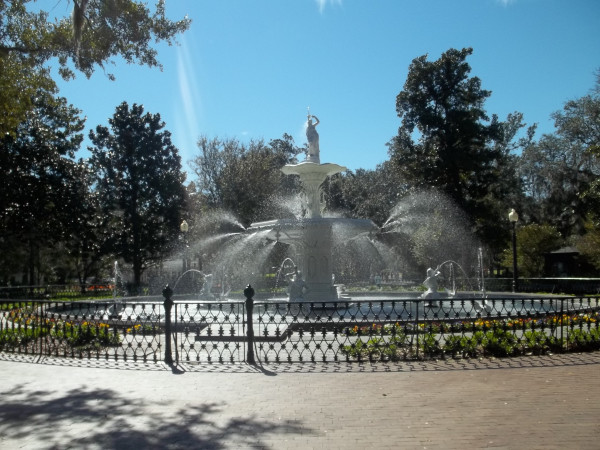 This is the fountain discussed above.
A plaque nearby reads: "In the 1840s, William Brown Hodgson (1801-1871) conceived the idea of setting aside ten acres of wooded land at this site for development of Savannah's first recreational park. It was named for former Georgia Governor John Forsyth (1780-1841). William Bischoff created the original landscape design. In the early 1850s improvements to the park included removal of some pines for walkways and ornamental planting, benches, and iron fencing around the perimeter. In 1854 the fountain and radiating walks were added. Originally created as a military parade ground, the twenty-one-acre Park Extension was added in 1867. The dummy forts were built in c.1909 and used for training during World War I."
( Collapse )
Collapse